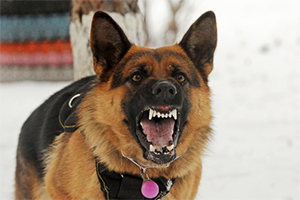 Dog bites can lead to facial scarring, puncture wounds, head and neck injuries, broken bones, infections, abrasions, or diseases. If you have been bitten by someone else’s dog, you might be able to obtain compensation by bringing a lawsuit. At Moll Law Group, our Chicago dog bite lawyers can investigate the surrounding circumstances and sue any parties that may have been responsible for your injuries.

Dangerous dogs are dogs that are somewhere other than a property owner or custodian’s property and left unattended. Dog owners should make sure that their dogs stay secured on their own property, and dogs that are kept on private property in Illinois are supposed to be kept in an enclosure with a fence that is at least six feet tall to prevent children from entering the area.

In Illinois, dog bite lawsuits are brought under a theory of strict liability. Generally, a dog owner cannot argue that they were unaware of their dog’s aggression or propensity to injure. Even when a dog does not behave aggressively, the owner is accountable if the animal attacks somebody unprovoked. Under 510 ILCS 5/16, the Animal Control Act, you must be able to show that the dog tried to attack or injure you, you had a lawful right to be in the place where you were at the time of the attack, and the dog was not provoked in any way. If a dog, unprovoked, tries to attack or actually injures someone acting peaceably in any place where the person has the right to be, the dog’s owner can be liable for any injuries that result.

A dog bite attorney in Chicago also can hold a defendant liable under a theory of negligence by showing enough facts to prove the defendant’s duty of care, a breach of duty, and an injury that legally resulted from the breach. A dog owner could be negligent, for example, by failing to warn about the dog or by violating a statute that would have prevented the injury, had it been followed. Additionally, it may be possible to hold a residential property owner liable under a premises liability theory if, for example, a dog bite occurred in a common area, rather than in a part of the property that has been rented by the owner.

What if you are bitten by a dog under the control of a rescue shelter? Under the definition of the Animal Control Act, an owner that can be held accountable is anybody that has a right of property in a dog, harbors and keeps the dog, has the dog in their care, acts as its custodian, or knowingly allows the dog to stay on any property occupied by the defendant. A party that assumes responsibility for a dog can be considered the dog’s keeper and held liable for a dog bite. A rescue shelter can be held accountable under the Animal Control Act. Similarly, a pet shop may be considered a keeper, and it can be held liable with the assistance of a Chicago dog bite attorney for a dog bite inflicted by a dog under its care or custody.

If you were injured by a dog bite, you may be able to sue for compensation. Our dog bite lawyers represent people in Chicago and the surrounding areas who have been injured by dogs, whether in the setting of a home, a rescue shelter, or a pet store. Call us at 312.462.1700 or contact us online for a free consultation.