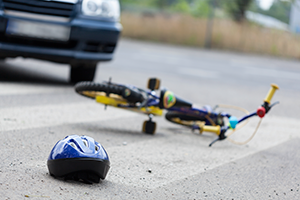 When a bicyclist is struck by a larger vehicle, he or she faces a high risk of serious injury or death. Catastrophic injuries may include traumatic brain damage, broken and fractured ribs, and spinal cord damage. If you have been harmed by a careless driver, the Chicago bicycle accident attorneys at Moll Law Group are available to assist you in recovering compensation for your costs and losses. Our transportation accident lawyers will investigate the details of your situation and represent you through each step of the legal process.

Many drivers of larger vehicles are negligent when driving around bicycles. They may speed excessively, cut off a bicyclist, fail to see the bicyclist at all, or be distracted by texting, makeup, or eating. You may seek to recover compensation for your injuries if you can establish another person’s or entity's negligence in causing the accident. To prove negligence, you need to establish by a preponderance of the evidence that the defendant owed you a duty of care, the defendant breached the duty of care, the breach actually and proximately (legally) caused your injuries, and you suffered actual damages. The preponderance of the evidence standard simply means that each element is more likely than not to be true.

In many cases, a defendant or its insurer will argue that the breach of duty is not what caused the accident, but instead the bicyclist's own negligence caused or contributed to the crash. Under the doctrine of comparative negligence, the jury can look at how both parties contributed to an accident. Illinois has adopted the modified comparative negligence approach under 735 ILCS 5/2-1116. This means that you may recover a reduced amount of damages if you were partly at fault, as long as you were less than 50% responsible for the crash. For example, the jury may determine that the total damages are $100,000, and the victim is 20 percent at fault. He or she may be able to recover up to $80,000 from the defendant because this amount is proportionate to the defendant’s degree of fault.  A bicycle accident lawyer can help Chicago residents try to minimize the degree of fault attributed to them.

Forms of compensation that may be recovered following a motor vehicle collision often include both economic and noneconomic damages, such as medical bills, property damage, out-of-pocket expenses, household services, lost income, pain and suffering, and scarring or disfigurement. Compensatory damages are designed to put you back into the position you were in before you got into an accident. In some particularly egregious instances, punitive damages also may be available. These are designed to punish a defendant and deter others similarly situated from engaging in such behavior.

If you have been injured as a result of someone else's negligence, the Chicago bicycle accident lawyers at Moll Law Group are available to help you recover the compensation you need to recover physically, emotionally, and financially. Our motor vehicle collision lawyers also represent injured individuals in Wheaton, Naperville, Schaumburg, and communities throughout Cook County. Billions of dollars have been recovered in cases in which we were involved. Call us at 312-462-1700 or use our online form to set up a free consultation.