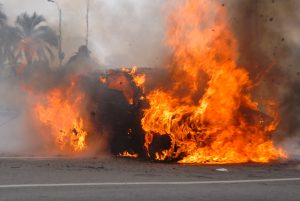 In a recent decision, a state appellate court dismissed a firefighter’s lawsuit after she was run over by a truck while sleeping at base camp. After a fire broke out in a national forest, firefighters were deployed to fight the fire. A base camp was set up for firefighters so that they could stay near the forest. The fire protection districts, who were managing the fire, were required to set up a quiet, shaded sleeping area for firefighters at the camp.

When the plaintiff returned to camp, the designated sleeping area was full. Some of the firefighters went to sleep by the horse barns, but she did not want to sleep there due to the conditions, and she asked her supervisor if she could sleep in the infield. Her supervisor agreed. Some others slept there as well. On the next night, after fighting the fire all day, she returned to base camp at around 9 p.m. She again asked to sleep in the infield, and her supervisor agreed. At around 10 p.m., another employee drove a water truck across the infield and ran over the woman. The truck crushed the woman’s chest, ribs, lungs, and left shoulder, and fractured her back. It also permanently damaged her heart, lungs, and eyes.

The woman sued the fire protection districts, among others, claiming she was injured because the district created a dangerous condition on public property. The defendants claimed they were immune from suit because the firefighter’s rule prevented the woman from recovering compensation. The state’s court of appeals agreed with the defendants and dismissed the lawsuit, finding the case was barred under the firefighter’s rule.

Under state law, public entities can be held liable for injuries caused by maintaining a dangerous condition on their property when the condition created a reasonably foreseeable risk of injury. However, public entities and public employees generally are not liable for injuries resulting from the condition of firefighting equipment or facilities, or for any injury caused in fighting fires.

The court found the defendants were immune from the lawsuit because public entities had immunity for any injury resulting from the condition of fire protection or firefighting equipment. Thus, the fire protection districts were not liable for injuries caused by a dangerous condition of property. The court also noted that most firefighters injured on the job in that state would still be able to recover compensation under the workers’ compensation law.

If you have been injured, and you believe someone else may be responsible, contact a skilled personal injury attorney as soon as possible. Whether you are able to recover damages in a premises liability lawsuit depends on whether the property owner or occupier owed you a duty to keep the premises safe. At Moll Law Group, our Chicago attorneys can assist you in your personal injury claim. We have decades of experience representing victims in a wide range of personal injury cases, including premises liability cases, car accident cases, and instances of medical malpractice. To set up a free consultation, call us at 312-462-1700 or use our online form.