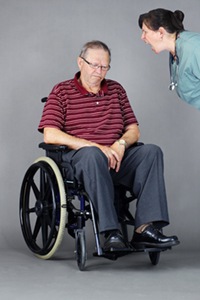 When you put your loved one in a nursing home, you expect him or her to receive appropriate care. Often, however, nursing homes are understaffed, or staff members are inadequately screened or trained. There may not be any physical signs of abuse, but verbal abuse may be as destructive as physical abuse. At Moll Law Group, our Chicago nursing home abuse attorneys can investigate whether your loved one is being subjected to verbal abuse, and we can vigorously advocate for their rights.

Verbal abuse is a common form of emotional abuse, and nursing home residents are particularly vulnerable to it. Verbal abuse may include bullying, shouting insults, making rude comments, blaming, mocking, trivializing a patient's concerns, criticizing the patient, or threatening the patient with force feeding, physical discipline, or other harm.

Staff members are in a position of authority over residents, and in some cases they resort to verbal abuse due to impatience or frustration about a resident’s actions or inability to control his or her own body. However, verbal abuse should be taken seriously, since it can inflict substantial emotional harm and stress, ultimately affecting the patient's psychiatric health. Prolonged periods of stress arising out of verbal abuse may weaken a resident's immune system, resulting in a greater number or severity of illnesses.

Nursing home residents may be too embarrassed to disclose verbal abuse to family members, or they may feel that there is nothing they can do because the abuse is not physical. Possible signs of verbal abuse include moodiness, withdrawal from socializing, low self-esteem, changed sleep patterns, increased anger, hopelessness, or changes in eating. Family members should talk to a nursing home resident often and visit all of the areas where residents interact with one another and staff to make sure that verbal abuse is not happening. Staff members are more likely to abuse a resident if they believe nobody is watching.

If you or a loved one suffers harm as a result of verbal abuse, it may be possible to file a lawsuit for compensation against the nursing home under the Illinois Nursing Home Care Act. The Nursing Home Care Act prohibits abuse or neglect in all long-term care facilities in Illinois. If you are able to establish a cause of action under the Act, you can potentially obtain a wide range of remedies. In the context of verbal abuse, this may include compensation for pain and suffering, an injunction ordering the nursing home and staff to use more care to avoid verbal abuse, and reimbursement for emotional counseling or other psychiatric care that becomes necessary due to the abuse.

You may also have other grounds for a lawsuit. For example, you may have common law causes of action, such as negligence or breach of contract. Whether you can sue for breach of contract depends on the specific language in your contract with the nursing home. You have two years from the date of an injury to sue for personal injuries or wrongful death.

Discuss Your Nursing Home Abuse Case with a Chicago Attorney

If you or a loved one has been affected by verbal abuse inflicted by nursing home staff, the Chicago lawyers at Moll Law Group are available to investigate and litigate your case on your behalf. We represent elderly people and their families in Naperville, Schaumburg, Wheaton, and communities across Cook County. Billions of dollars have been recovered in cases in which we have been involved. Call us at 312-462-1700 or contact us online to set up a free consultation with an injury attorney.