Chicago-Based Lawyers for Injury Claims Arising Out of Tipped Furniture 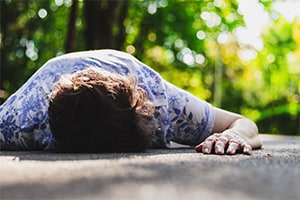 The United States Consumer Product Safety Commission (CPSC) has told parents and caregivers to anchor their televisions and furniture to the walls of their homes in order to protect their children from tip-over injuries or deaths. It issued a new report that showed an estimated yearly average of 22,500 Americans needed ER treatment between 2018 – 2020. Almost 44% of those who needed ER care were under age 18. If your child was injured or killed by furniture that tipped over and suspect it was due to a defect, you should consult the seasoned Chicago product liability lawyers of Moll Law Group. Billions have been recovered in cases with which we were involved. While we are based in Chicago, we represent clients across the country.

The CPSC report determined that there have been 581 tip-over deaths involving TVs, furniture, and appliances since 2000. Of these 472 have been children aged 17 and younger. Around 71% of the deaths of children involved tipped televisions and around 62% of all the fatalities involved a television. Around 55% involved death by crushing. Head injuries were involved in 66% of the fatalities.

There was a 55% decrease in all ER tip-over injuries, however, from 2011- 2020. In particular, there was a decline in tip-over injuries involving televisions. Even so, around 45 million new televisions were purchased in 2021, which means there are many more new risks for tip-overs in homes around the country. The CPSC noted the ease and speed with which anti-tip-over kits can be installed; they typically cost less than $20.

The CPSC instituted an Anchor It! campaign in 2015 to try and help families avoid the risks of falling furniture. The campaign involved a public safety announcement video that included footage of incidents that were potentially fatal. Families should anchor TVs, bookshelves, and dressers to the walls and avoid displaying things where children could try to reach for them. old televisions should be recycled or should continue to be anchored in another room.

Product Liability Claims in Chicago and Across the Country

In some instances, television or furniture manufacturers may bear liability for a child’s tip-over injuries or death. When furniture has a design, marketing, or manufacturing defect, it may be appropriate to hold them accountable for the losses occasioned by that defect. Marketing defects often involve failure to warn; for instance, a furniture maker may be responsible if its product has a likelihood of tipping and crushing a child, but it placed no warnings on the product to mount the furniture to the wall, or the warning was insufficient. Theories under which recovery may be available include strict liability, negligence, and breach of warranty.

In product liability lawsuits, fault is expressed in monetary damages. For example, if your child’s arm was crushed and rendered useless because of a tipped dresser, it may be appropriate to sue for damages such as emergency room bills, medical care, mental anguish, and loss of enjoyment. In some cases, these damages are placed in a structured settlement for children who have long-term disabilities as the result of a defective product.

Nothing truly makes up for the loss of a child, but it is appropriate to hold a manufacturer accountable when its product is defective and results in a child’s death. Each state has its own wrongful death laws in the event that tipped furniture results in death. In Illinois, a wrongful death happens when somebody dies due to another’s negligence, wrongful act, or default. Parents can bring a wrongful death claim in any situation in which the child could have sued for personal injuries, through a guardian, had she survived.

If you were injured or a loved one was killed due to furniture that tipped over, you should consult the experienced Chicago-based lawyers of Moll Law Group about whether you have a viable claim against its manufacturers. We represent plaintiffs across the country. Please complete our online form or give us a call at 312.462.1700.