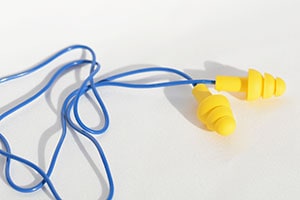 Earplugs are small devices made of various materials that are worn to protect the inner ear from many forms of damage, such as noise and water. Earplugs are classified by the material from which they are made, whether it is polyvinyl chloride foam, silicone, webbed rings, or some other custom-molded material. Different earplugs provide differing levels of hearing protection. Recently, earplug manufacturer 3M settled a whistleblower claim that alleged that its earplugs supplied to military personnel in Iraq and Afghanistan were defective, such that they did not block sounds of war, such as explosions, and service members and military veterans were harmed. At Moll Law Group, our earplug injury lawyers handle 3M Earplug claims as well as other defective product claims. Many consumers are concerned about whether earplugs are safe. Below you will find some general answers to questions that may concern you.

Can Earplugs Damage Your Hearing?

Earplugs are often used for noise protection when a consumer is going to be exposed to consistent or very loud sound levels. Many people suffer from hearing loss, and while some hearing loss is age-related, other hearing loss is based on noise exposure. Earplugs are a way to stop premature hearing damage, but if they are not used properly or are defective, they can damage the user’s hearing.

Is it Safe to Wear Earplugs to Sleep?

Earplugs can be useful and safe for sleeping, especially if a consumer is a light sleeper. Earplugs are designed for nighttime use in connection with noisy neighbors or music or TV in another room or a snoring bedroom partner. Although nighttime use is generally safe, there are potential dangers. The prolonged use of earplugs can result in impacted earwax and tinnitus. Furthermore, earplugs can put a consumer at risk when he or she needs to be alert to noises that something is awry, such as when caring for a child or listening for smoke alarms. Using the same earplugs repeatedly can result in bacteria build-up and an ear infection. Ear infections that are not treated can result in permanent hearing damage.

Can Earplugs Cause Permanent Tinnitus?

Tinnitus is a sensation whereby someone hears a sound even though there are no external sounds. Often, it takes the form of buzzing, ringing, humming, or whooshing sounds in the ear. These may be intermittent or continuous. Earplugs do not, on their own, cause permanent tinnitus. However, permanent tinnitus can result if earplugs were defective and did not properly protect your ears from hearing damage caused by loud sounds or other harmful noises. Tinnitus can also result from an untreated ear infection caused by dirty or bacteria-laden earplugs.

Earplugs may make tinnitus worse in situations in which there is an untreated ear infection caused by using a particular pair of earplugs too frequently. Defective earplugs that fail to block the loud sounds that they claim to block could worsen tinnitus. Additionally, the use of earplugs to reduce external noise can make tinnitus more noticeable (and therefore seem worse) because there is less external sound to muffle the tinnitus sound.

Can Silicone Earplugs Damage Your Ears?

Silicone plugs are soft and moldable. They can be molded to fit into the outer ear canal. However, if they are not used properly or if they are defective, such that they do not fit, they can cause harm to the ear. For example, the 3M earplugs are alleged to be defective, such that they are not long enough for every user’s ear, and therefore some users were exposed to war sounds that damaged their hearing or caused tinnitus.

Which Earplugs are Best (Safest) for Sleeping?

Disposable earplugs are usually safest for sleeping. They are made of soft foam. However, they are not supposed to be worn repeatedly for a period of many days. They are supposed to be used 1-2 times before a new pair is used.

Is it Bad to Wear Earplugs Every Night?

Earplugs should not be worn every night. When you do not wear them every night, you allow your ears a chance to drain any earwax that has built up.

Can Wearing Earplugs Cause Vertigo?

Sometimes if earplugs are inserted too deeply into the ear, vertigo may result.

How Does Tinnitus Affect Everyday Life?

Tinnitus can have numerous effects on everyday life. The difficulties that people can experience include frustration, anger, quick emotional reactions, concentration difficulties, and fear of a serious medical or psychological issue. Certain lifestyles can result in greater attention to tinnitus and consequently greater distress. These lifestyle elements include sleeplessness, stress, unemployment, or spending time in quiet spaces.

How Often Should You Change Your Earplugs?

The foam inserts and ear cushions on an earplug should be replaced every 6-8 months, assuming ordinary, temperate weather. However, if you use your earplugs a lot, and the climate is humid or extreme, you may need to change the foam and ear cushions every 3-4 months. Bacteria and dirt can gather in the foam, resulting in ear infections.

If you suffered tinnitus or another ear injury due to a defective earplug, you may have a basis to obtain damages by suing the manufacturer in a product liability lawsuit. Moll Law Group is a Chicago-based product liability firm that is familiar with 3M earplugs and the problems with them. Call us at 312.462.1700 or use our online form to set up an appointment.