Home
Personal Injury Practice
Toxic/Environmental Injury
What Are The Dangers of Playing on Artificial Turf?

What Are The Dangers of Playing on Artificial Turf? 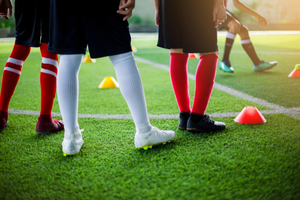 Are Athletes at Risk on Artificial Turf?

School boards and recreation departments prefer children from pre-K to college play sports on artificial turf. If you ask a parent what surface they prefer, you will find that they are playing on a completely different team.

So, What’s the Problem?

Various pigments are used to provide the green color to the blades to make them look natural and can include lead, titanium, and other metals for on-field logos. Lead is a known neurotoxin that can harm both developing (young athletes) and mature nerve tissue.

Little black crumbs support the blades and are made from tires, which are a mixture of natural and synthetic rubber and carbon black. Modern tires are also made with anywhere between four and ten gallons of petroleum products. Also, the tires are exposed to other chemicals (like dibenzoprynes) prior to being in the turf, which the turf can then absorb. Dibenzoprynes is a known carcinogen, and carcinogenic chemicals can promote the formation of cancer.

While the tire crumbs start out as larger pieces, they breakdown over time due to excessive use and weather conditions. Dr. Stuart Shalat, Professor and Director of the Division of Environmental Health, School of Public Health, Georgia State University, conducted a study that showed that the tiny particles from the turf could be suspended in the air and inhaled or swallowed by the athletes on the field.

Laying Down the Law

On July 16, 2010, Attorney General Edmund G. Brown Jr. announced a settlement that required two of the largest artificial turf makers and installers to eliminate nearly all lead from their products.

The two companies were Beulieu, LLC, a supplier of artificial turfs to retailers, and Field Turf, USA, a maker and installer of artificial turf friends. The settlement required that the companies update their products to contain less than 50 parts lead per million. There were lab results that found some products contained more than 5,000 parts lead per million, which was more than ten times the state and federal guidelines for content in children’s products.

In March 2019, Monsanto, maker of Roundup weed killer, was ordered to pay over $80 million in compensatory and punitive damages to a plaintiff that suffered non-Hodgkins lymphoma from the use of Roundup and its glyphosate ingredient.

The link between cancer and artificial turf gained national attention when NBC’s Nightline News put out a series of news stories regarding a possible cluster of cancers in young women soccer players. A cancer cluster is the appearance of an unusually high rate of cancer in one location in a particular time frame.

In 2009, associate head coach for the University of Washington’s women’s soccer team Amy Griffin spent time visiting women and other athletes in local hospitals. During that time, she and a nurse noticed a trend – a lot of the players that were going through chemotherapy were goalies. Griffin compiled a list of 38 American soccer players who were diagnosed with cancer, 34 of which were goalies. To this day, she continues to push for and speak out on the potential dangers of artificial turf.

Before 2016, limited studies were done on the safety of recycled rubber tire crumb used in synthetic turf fields and playgrounds in the United States. The concerns raised by the public about these potential dangers led to a multi-agency Federal Research Action Plan on Recycled Tire Crumb Used on Playing Fields and Playgrounds to study key environmental and human health questions. According to the EPA, their report is now undergoing peer review.

While there is no conclusive evidence yet, it doesn’t hurt to protect yourself and your children should you find yourselves on artificial turf. Some tips include:

Are Athletes at Risk on Artificial Turf? - Infographic