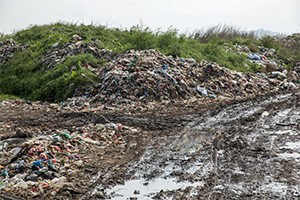 Too many corporations turn enormous profits at the expense of their neighbors. Many corporations, particularly manufacturers, dump toxic chemicals used in the manufacturing process with inadequate protection for those who live nearby. Toxins in groundwater or air can cause cancers of all kinds, brain damage, organ damage, or birth defects. Sometimes these conditions lead to death. A dumping injury attorney can help hold an irresponsible corporation accountable. At Moll Law Group, our toxic tort attorneys can help you bring a lawsuit if you believe that the dumping of toxic chemicals in your area made you sick.

A corporation's dumping of wastes or chemicals used in manufacturing or agriculture is just one of many ways that a plaintiff may be exposed to toxic chemicals. Both groundwater and air may be contaminated as a result of a corporation dumping pollutants.

One of the distinctive features of a toxic tort case involving dumping is that the harm may take years to develop. For example, people in a particular neighborhood may be exposed to contaminated groundwater, but they may not develop cancer for 10 to 20 years after prolonged exposure. Generally, the statute of limitations does not start to run until an injury is known or reasonably should be known. However, it is important to consult an attorney as soon as you suspect that you have become sick as a result of a corporation's dangerous dumping practices. For example, if you live in a cancer cluster where multiple people develop the same type of kidney cancer, and you all live near a manufacturing plant that makes dry cleaning solvents, you should bring this information to a dumping injury lawyer to investigate.

Both federal and state laws govern dumping. In many toxic tort cases, there are both federal and state causes of action against a corporate defendant. One Illinois cause of action that may be applicable is negligence. To establish negligence, you will need to establish that the corporate defendant owed you a duty of care not to dump chemicals so that they get into the groundwater, the defendant breached this duty, the breach caused your illness or injury, and you sustained actual damages.

In some cases, the standard of care can be established through reference to a statute that prohibits the type of behavior in which the defendant engaged. For example, a defendant that violates an Environmental Protection Agency regulation in dumping chemicals will likely be found to have breached a duty. However, in cases in which the defendant acted a long time ago, before certain environmental standards for dumping were developed, it may be harder to establish a duty or breach of duty.

Causation is often the most complex element to prove in a toxic tort case. It consists of both actual causation and proximate or legal causation. To establish proximate causation, a plaintiff needs to show that the defendant's actions were a substantial factor in his or her injuries and that there is a strong link between the action and the injury or illness. If the link is too weak or there are a lot of intervening events that might have played a role, a court may not find proximate causation. Toxic tort cases depend on complex scientific testimony from experts, and it is important to work with attorneys who retain credible experts who not only understand the science linking the toxin to your illness but also can explain the science in an accessible way to a jury of laypeople.

If you believe you contracted an illness due to the dumping of chemicals, the dumping injury lawyers at Moll Law Group are available to investigate and sue the responsible parties. In some cases, it may be appropriate to bring a class action lawsuit against a corporation on behalf of a neighborhood in which multiple people were victims of the toxic dumping. In other cases, it may be best to file individually. We provide legal representation to injured people nationwide, including in states such Ohio, New York, Pennsylvania, California, Texas, Illinois, and Florida. Billions of dollars have been recovered in cases in which we have been involved. You can contact us online or call us at 312-462-1700 to set up a free consultation with an injury attorney.