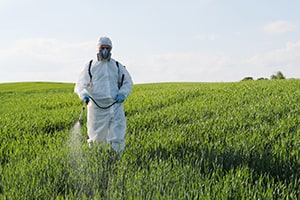 Paraquat is an acutely toxic herbicide that is used for agricultural purposes. Farmers use it to control grass and weeds or as a crop defoliant. If you suffered injuries or a loved one died due to paraquat exposure, you should consult the paraquat injury lawyers at Moll Law Group. You may be able to recover damages in a product liability lawsuit. These lawsuits can be complex. Often, manufacturers have substantially more resources than do consumers or other ordinary people affected by their dangerous products. This makes it important to talk to an experienced attorney about your legal options.

If you suffered from Parkinson's disease due to Paraquat exposure, contact Moll Law Group today for a FREE consultation. Click or call (312) 462-1700 today.

Epidemiological studies have shown that exposure to paraquat may be associated with severe medical complications, including Parkinson’s disease, a common neurological disease. Parkinson’s can result in speaking difficulties, swallowing problems, rigidity, tremors, impaired balance, and extremely slow movement. A 2009 study in the American Journal of Epidemiology found that exposure to paraquat within 500 meters of a home increased the risk of Parkinson’s by 75 percent.

You may be exposed to paraquat through ingestion, a cut or sore, or extended skin exposure. Paraquat may result in lung damage if it is inhaled. When paraquat causes injuries, a paraquat injury attorney may be able to help a victim sue the manufacturer in court for compensation. For instance, if you worked on a farm, and your work included mixing and cleaning up paraquat, or you were exposed to crop dusting sprayers, and then you developed Parkinson’s disease and lung disease, you may have a product liability claim. Paraquat endangers not only farmers but also families who live near farms where paraquat is used.

You may develop a medical condition even if you were exposed to only small amounts of paraquat. Medical conditions that you are at risk of experiencing include lung scarring, liver failure, kidney failure, and heart failure. If you ingest a large amount of paraquat, you could go into a coma or develop confusion, acute kidney failure, heart injuries, lung scarring, respiratory failure, seizures, or liver failure. Symptoms of paraquat poisoning include pain and swelling of the throat and mouth, nausea, vomiting, diarrhea, and abdominal pain.

If you suffered from Parkinson's disease due to Paraquat exposure, contact Moll Law Group today for a FREE consultation. Click or call (312) 462-1700 today.

Manufacturers of herbicides such as paraquat have a duty to produce and distribute safe products without defects that are unreasonably dangerous. When there are risks associated with a product, such as a risk of developing Parkinson’s disease through paraquat exposure, the product’s manufacturer should provide warnings to users and consumers. In 2017, agricultural workers filed a paraquat lawsuit, alleging that they were not aware of the serious health risks of paraquat. Other paraquat lawsuits may be brought and then consolidated in federal court. An injury lawyer who handles paraquat claims may be able to hold the manufacturer accountable for any injuries that you sustained as a result of the herbicide under theories of strict liability and negligence.

There are three categories of product defects that you may be able to assert and prove to recover compensation: design, manufacturing, or marketing defects. If you are claiming that you sustained injuries as a result of paraquat exposure, you would most likely allege design or marketing defects. A design defect is an inherent flaw that exists in every copy of a product. To establish liability for a design defect, you may need to prove that there was a reasonable alternative design that would have been safer than the original design without greatly affecting the cost of manufacturing and practical use.

Most marketing defects involve a failure to warn. The studies linking paraquat with Parkinson’s disease date back years. Knowing of these studies, paraquat manufacturers may have needed to issue warnings about the link between the two. Manufacturers owe a duty to adequately warn or instruct a user about dangers of their products that they knew or should have known at the time when a product left a manufacturer’s control.

If an injury attorney assisting a paraquat victim can successfully establish liability in a product liability lawsuit, they may be able to recover compensation for lost income, medical expenses, and pain and suffering. If you lost a loved one, you may be able to sue for wrongful death and obtain compensation for funeral and burial expenses, as well as loss of earnings and non-economic harms that arise as a result of a loved one dying due to paraquat exposure.

Consult a Seasoned Lawyer About Your Product Liability Lawsuit

Q: What is Paraquat?
A: Paraquat is an acutely toxic herbicide that is used for agricultural purposes. Farmers use it to control grass and weeds or as a crop domain. Paraquat is an RUP (Restricted Use Pesticide), which can only be purchased or used by certified 'licensed applicators.'

Q: What are the side effects of Paraquat exposure?
A: Epidemiological studies have shown that exposure to Paraquat may be associated with Parkinson's disease, which can result in speaking difficulties, swallowing problems, rigidity tremors, impaired balance, and extremely slow movement. Lung damage can also be a result of Paraquat inhalation.

Q: Is Paraquat banned?
A: Paraquat is banned across much of the world, but is still used in the United States.

Q: What are some other brand names for Paraquat?
A: Blanco, Bonfire Herbicide, Devour, Firestorm, Gramoxone, Helmquat, Para-SHOT, Parazone, and Quik-Quat.