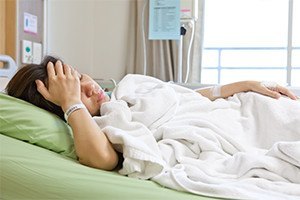 Transvaginal mesh is a polypropylene plastic used to treat stress urinary incontinence and pelvic organ prolapse, which are sometimes suffered after a woman gives birth, goes through menopause, or has a hysterectomy. Although mesh is supposed to treat these complications, mesh surgery itself can result in severe and painful complications that require further surgery, including infections, scarring, pain during intercourse, nerve damage, and organ perforation. One of the many manufacturers of transvaginal mesh that have faced product liability claims is C.R. Bard. If you were hurt by a C.R. Bard product, the experienced Bard transvaginal mesh lawyers at Moll Law Group are available to help you recover compensation for your injuries. We represent injured consumers across the nation.

The first two trials in which consumers brought claims against C.R. Bard in connection with transvaginal mesh injuries resulted in victories for the plaintiffs. In 2015, C.R. Bard agreed to settle about 3,000 transvaginal mesh claims arising out of injuries from these medical devices. Among other things, the claims against Bard alleged that the manufacturer provided false and misleading information and that it knew that its synthetic mesh products were not compatible with human tissue but manufactured and sold them anyway. Specifically, it has been alleged by Bard transvaginal mesh attorneys that the manufacturer used prohibited resin. C.R. Bard has continued to deny that the device is dangerous.

In product liability cases, plaintiffs must establish that a product is defective in one of three ways: manufacturing, design, or marketing. Most states allow a plaintiff to use a strict liability theory, in which he or she must prove that a product is defective and that the defect caused injuries. However, in certain states, the plaintiff will need to establish negligence, which requires proof that the manufacturer's conduct fell below a particular standard of care.

A plaintiff who is able to establish a manufacturer's strict liability or negligence may recover compensatory damages. These are damages that are meant to make a plaintiff whole, including compensation for both economic and noneconomic losses. Economic damages may include the costs of past and future surgeries, lost income, and other tangible, documented losses. In some cases, economic damages are the only way a plaintiff can pay for the necessary surgeries to correct injuries caused by transvaginal mesh. Noneconomic losses may include the pain and suffering, loss of consortium, and loss of enjoyment associated with injuries caused by defective transvaginal mesh.

If a plaintiff can establish egregious conduct by a manufacturer, punitive damages may be available. Usually, allegations of fraud or other willful misconduct (such as allegations that a manufacturer knew of a material's incompatibility with human tissue but used it anyway) must be proven by the higher "clear and convincing evidence" standard when asking for punitive damages. These are damages awarded in order to punish a manufacturer and deter similar future conduct. Generally, the amount of punitive damages depends on what could conceivably make an impact on a particular defendant, subject to constitutional constraints.

Protect Your Rights by Consulting a Bard Transvaginal Mesh Lawyer

If C.R. Bard transvaginal mesh caused your injuries, the knowledgeable Bard transvaginal mesh attorneys at Moll Law Group are available to help you pursue compensation. Billions of dollars have been recovered in cases in which we have been involved. Our firm represents consumers harmed around the nation, including in states such as Michigan, Texas, Ohio, Illinois, Pennsylvania, New York, Florida, and California. Call us at 312-462-1700 or complete our online form to schedule a free consultation with a product liability attorney.