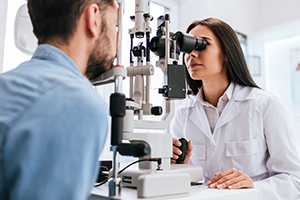 Elmiron is a drug prescribed to treat interstitial cystitis. It works by protecting the inner bladder walls. Urologists usually prescribe it at a dose of 300 mg per day, but some patients have been prescribed 1,000-1,500 mg per day. Growing research indicates that there may be a relationship between Elmiron and retinal maculopathy, a degenerative eye disease. Symptoms of the disease can include image distortion, muted colors, blindness, blurry vision, difficulty reading, loss of vision detail, dark spots, loss of night vision, and more. If you were diagnosed with retinal maculopathy or another degenerative eye disease with similar symptoms, and you used Elmiron, you may have a basis to file a claim. The knowledgeable Elmiron injury lawyers at Moll Law Group may be able to represent you in a lawsuit for compensation.

History of Links Between Elmiron and Retinal Maculopathy

The Emory Eye Center discovered a new eye disease classified as retinal maculopathy in six female patients from 2015-2018. The dysfunction was similar to the dysfunction seen in age-related macular degeneration. The common element among these six patients was that all six had been diagnosed with interstitial cystitis and were taking the prescription drug Elmiron.

Further research has shown that of 1,605 surveyed patients who take Elmiron, 53.87% reported that they had developed retinal disease. The FDA has received a petition from IC Network asking for changes to be made to Elmiron’s warning label; the petition asks that the warning label recommend that Elmiron users be monitored by an ophthalmologist each year to decide whether retinal maculopathy has resulted from Elmiron use. The medical community does not yet understand how the drug is causing damage, and in at least one case, a patient’s eye condition continued after they stopped using the medication.

In an unmasked clinical trial of 2,499 patients taking Elmiron over four years, vision and adverse events related to the eye were reported. People who took the drug for anywhere from three months to four years suffered the adverse reactions of optic neuritis and retinal hemorrhage. Our Elmiron injury attorneys have noted that Janssen Pharmaceuticals, the manufacturer of Elmiron, saw those results but did not list any warnings on its label, and it did not conduct further tests to investigate whether there was a component of Elmiron triggering eye problems.

It is possible that ophthalmologists around the country have wrongly diagnosed retinal maculopathy as age-related macular degeneration or macular/pattern dystrophy, not realizing that it is a retinal injury caused by Elmiron. You may not have realized that you had a macular condition and assumed that your eyesight was going bad.

The manufacturer has been sued in lawsuits that allege that it failed to properly warn patients and doctors of known eye-related injury risks associated with Elmiron use.Product liability lawsuits can be brought in connection with three classes of defects in dangerous drugs: design, manufacturing, or marketing. A failure to warn is one type of marketing defect.

If you were not warned about the risk of developing a retinal eye disease in connection with taking Elmiron, and you developed that eye disease, an injury attorney who handles Elmiron cases can help you sue the manufacturer for its failure to warn.

It may also be possible to bring a lawsuit under a theory of design defects. When alleging design defects, you must show a flaw or mistake in a product’s design that made the product unreasonably dangerous to consumers. Tests used to determine design defects include the consumer expectations and alternative design tests.

If you or someone you know suffered blindness or other symptoms of retinal maculopathy due to the use of Elmiron, a claim may be filed seeking recovery for damages. At Moll Law Group, our injury lawyers are able to advise Elmiron users on their options and represent them in any litigation that may be appropriate. Billions of dollars have been recovered in lawsuits in which we have been involved. Call us at 312.462.1700 or contact us online.