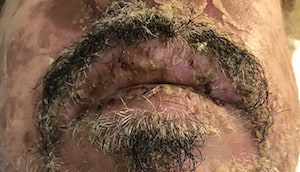 Stevens Johnson Syndrome is a less severe version of Toxic Epidermal Necrolysis, in which more than 30% of the skin becomes infected. If you have developed Stevens Johnson Syndrome, it is an emergency. Medications must be stopped right away, especially if they are associated with the syndrome. Stopping the medications and providing a diagnosis right away can reduce the amount of skin damage that occurs. However, once damage is done to more than 10% of the body's surface area, it is likely that catastrophic injuries or death will result. Permanent injuries that can arise from Stevens Johnson Syndrome include scarring, chronic pain, loss of teeth, blindness, and organ damage to the kidneys, heart, or lungs.

If you or a loved one developed Stevens-Johnson Syndrome or Toxic Epidermal Necrolysis because of a dangerous drug, you may be able to recover compensation through a product liability lawsuit. Generally, to recover damages based on product liability, your Stevens Johnson Syndrome lawyer will need to show a marketing defect, manufacturing defect, or design defect. For example, you should have been given warnings about Stevens Johnson Syndrome if you were taking any of the drugs that are associated with developing it. If you were not given warnings, or the warnings were inadequate, there may be a marketing defect. In some jurisdictions, it is possible to hold a drug manufacturer strictly liable for a failure to warn, while in others, it may be necessary to show negligence.

Consult a Stevens Johnson Syndrome Attorney About Your Potential Claim

If you were injured or a loved one suffered a wrongful death due to Stevens Johnson Syndrome, the experienced attorneys at Moll Law Group can examine the facts of your situation and evaluate whether you may have a viable claim. Our law firm pursues remedies for injured consumers and patients across the country. We serve people in states such as Illinois, California, Florida, New York, Texas, Pennsylvania, Ohio, and Michigan. You can call us at 312-462-1700 or complete our online form.