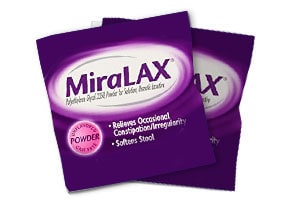 MiraLAX is a stool softener that people use when they are having trouble with going to the bathroom due to constipation. Constipation happens when stool is moving through the colon very slowly, such that an excess of water is removed. MiraLAX contains PEG 3350, which is approved for adults to use for up to seven days. There is no FDA recommendation that kids under the age of 17 use it or that it be used for longer. However, doctors do prescribe MiraLAX for use in kids, and sometimes adults take it longer than the recommended amount of time. If you or your child sustains injuries as a result of taking MiraLAX, the experienced MiraLAX lawyers at Moll Law Group are available to file a product liability lawsuit on your behalf. Billions of dollars have been recovered in cases in which our dangerous drug attorneys have been involved.

MiraLAX has several warnings for serious side effects like bloody diarrhea, blood in stool, cramps, stomach pain, dizziness, and an increase in sweating. Back in 2011 and 2012, parents started to contact the Food and Drug Administration with worries about neurological or behavioral symptoms, such as OCD symptoms and rage, after their kids took MiraLAX. Bayer, which manufactures MiraLAX, has been sued in 2015 by a patient who claims that he suffered an acute injury to his kidneys as a result of his long-term use.

For many pediatricians, MiraLAX is a go-to medicine when there are gastrointestinal symptoms in children. The FDA has stated that there is an insufficient link between MiraLAX and adverse effects to issue warnings, but it has received hundreds of complaints related to kids who have experienced adverse events after taking the stool softener. Bayer claims that there have been multiple clinical studies conducted on kids that show that MiraLAX is safe for short- and long-term use among pediatric patients.

If you or your child were harmed by MiraLAX, you might have grounds to bring a product liability lawsuit against the manufacturer with the help of a MiraLAX attorney. Manufacturers owe a duty to provide an adequate warning about what the risks of a drug are, rather than only touting its benefits. A failure to warn is just one kind of actionable defect, a marketing defect, alongside others such as manufacturing or design defects. Warnings are not required in every instance, but they are required when the product is dangerous in a way that the consumer cannot foresee, the product is dangerous when used in a reasonable way, or the manufacturer knows about the danger. Each jurisdiction has its own rules for a failure to warn case.

Generally, a manufacturer of a prescription drug can discharge its obligation to provide an adequate warning by providing the warning to the physician prescribing the drug under the learned intermediary doctrine. It is believed that a doctor is in a better position to weigh the costs and benefits of a particular drug to a particular patient than the manufacturer is. However, when a drug is over the counter, the warning should be adequately conveyed to the consumer directly.

Sometimes there is an issue about whether a plaintiff's use of a drug was foreseeable. Some consumers do misuse products or use them in unforeseeable ways. If the use of the product is not foreseeable, a manufacturer may not be held accountable for a failure to warn. Since many pediatricians prescribe or recommend MiraLAX for children, it is unlikely that this particular defense would be available to a manufacturer being sued for an injury to a child.

Hire a MiraLAX Attorney to Assert Your Rights

If you or your child were injured because of using MiraLAX, the product liability lawyers at Moll Law Group can evaluate whether you have a basis to bring a lawsuit. We pursue failure to warn claims for injured people all over the country, including in states such as Illinois, Michigan, Ohio, Pennsylvania, Texas, New York, Florida, and California. Call us at 312-462-1700 or contact us by completing our online form for a free appointment with a MiraLAX lawyer.