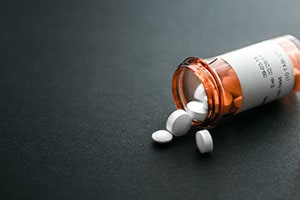 Opioid over-prescription is a serious problem throughout the U.S. Primary doctors often prescribe pain pills for simple back pain. However, some have tied pain pills to the heroin epidemic. Doctors are supposed to use reasonable care to act as other doctors in the same specialty would act under the same circumstances, and they must abide by a professional standard of care. If you were harmed due to an opioid over-prescription, the Chicago medical malpractice lawyers at Moll Law Group can represent you in a lawsuit for compensation.

Recently, two plaintiffs won a medical malpractice trial against a doctor and a university hospital. The trial turned on the opioid abuse epidemic. In the case, the defendant doctor and hospital had prescribed a 45-year-old city parks employee who worked in mechanical maintenance more than 37,000 pain pills between 2008 and 2012, in an amount much higher than what is recommended by the Centers for Disease Control and Prevention. The worker went to see his primary care doctor for back pain, and he was put on a dose of opioids that kept increasing. Between 2008 and 2012, he went from 49 mg of opioid medications equivalent to morphine to 1,555 mg per day. This is a massive increase, particularly since CDC guidelines require that no more than an average daily dose of 100 mg of a morphine-equivalent opioid be given. An expert for the plaintiffs stated that these doses were reckless and colossal.

At one point, the worker took Oxycontin, Vicodin, and oxycodone, and after getting addicted, he had to go to a drug rehab center. His relationships with his wife and children were adversely affected by the side effects of pain pills, including depression, and eventually his wife and he started divorce proceedings.

The jury found for the plaintiff, awarding him $1.4 million and awarding his wife $1.2 million. The jury also awarded $15 million in punitive damages, an amount designed to punish the defendants and deter future similar conduct.

Each state has its own medical malpractice rules, and in Illinois, a patient has up to two years from the date that they knew or should have known about an injury to sue a health care provider. In Illinois, a patient cannot bring a lawsuit more than four years after a medically negligent action happens.

If you were injured or a loved one died due to an opioid over-prescription, the Chicago lawyers at Moll Law Group can evaluate whether you have a basis to sue the doctor. We pursue claims for patients in Naperville, Schaumburg, Wheaton, and other cities in Cook County and beyond. Call us at 312-462-1700 or contact us online for a free appointment with a medical malpractice or dangerous drug lawyer.